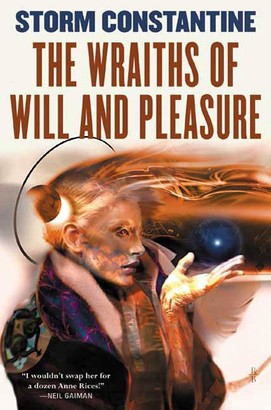 The Wraiths of Will and Pleasure

The First Book of the Wraeththu Histories

Buchbeschreibung zu „The Wraiths of Will and Pleasure“

Hailed as "a literary fantasist of outstanding power and originality" by Michael Moorcock, Storm Constantine is one of the most exciting and innovative fantasy writers of her generation.

A tale of intrigue and betrayal, bloodshed and pleasure, dark and dangerous supernatural forces, ardent and consuming passions, The Wraiths of Will and Pleasure is a thrilling new chapter in a compelling fantasy epic.

The author of many acclaimed works of science fiction and fantasy, Constantine is best known for her daring, stylish and provocative Wraeththu trilogy (The Enchantments of Flesh and Spirit, The Bewitchments of Love and Hate, The Fulfilments of Fate and Desire). The series, which chronicled the rise of a new race of seductive androgynous beings with awesome powers, was hailed as a modern fantasy masterpiece, winning an avid international following of devoted readers.

Now, with The Wraiths of Will and Pleasure, Storm Constantine returns once again to the saga of the Wraeththu with a new epic that reveals previously unknown truths about the origins of these remarkable beings.

Long before the Wraeththu assumed total mastery of the Earth and dominion over the dwindling remnants of the human race, they were a wild and passionate people, living in scattered tribes, worshiping strange gods, increasing their numbers by transmuting humans into their own kind. But all that changed on a festival night that surpassed all others, a night when the world changed forever and the Wraeththu began to realize their awesome potential.

It was a time when the archmage Thiede wove the strands of Wraeththu destiny. When two young Wraeththu hara came together to produce a miraculous new life. When Pellaz, a brash and reckless young leader, rose from destruction to take his place in Wraeththu history. And a child called Lileem found a path of passion and power that led to unknown worlds of mystery.

Storm Constantine has written over twenty books, both fiction and non-fiction and well over fifty short stories. Her novels span several genres, from literary fantasy, to science fiction, to dark fantasy. She is most well known for her Wraeththu trilogy (omnibus edition published by Tor), and a new set of novels set in the world of Wraeththu, beginning with The Wraiths of Will and Pleasure (Tor, 2003). Wraeththu are magical and sensual hermaphroditic beings, who when their story first began, almost twenty years ago, broke startling new ground in the often staid fantasy/sf genres.

Her influences include myth, magic and ancient history and the foibles of human nature. She uses writing and fiction to bridge the gap between mundane reality and the unseen realms of imagination and magic. She strives to awaken perception of these inner realms and the unexplored territory of the human psyche.

Aside from writing, Storm runs the Lady of the Flame Iseum, a group affiliated to the Fellowship of Isis, and is known to conduct group members on tours of ancient sites in the English landscape, in her husband's beat up old army Land Rover. She is also a Reiki Master/Teacher, has recently set up her own publishing company, Immanion Press, to publish esoteric books, and teaches creative writing when she gets the time.

Neil Gaiman, author of the Sandman series, once said: 'Storm Constantine is a mythmaking, Gothic queen, whose lush tales are compulsive reading. Her stories are poetic, involving, delightful, and depraved. I wouldn't swap her for a dozen Anne Rices!'

Ähnliche Bücher wie „The Wraiths of Will and Pleasure“