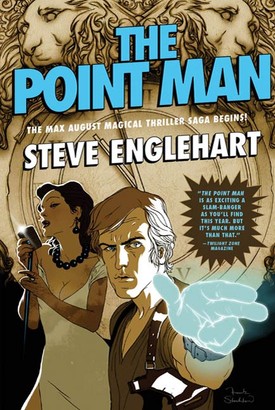 Max August was a point man when he served during the Vietnam War, the guy who had to lead his patrol through dangers he couldn't possibly anticipate. Now he's a disc jockey, at one with the music and his faithful audience . . . until the day when he is swept into a battle invisible to all but the participants.

For nearly five centuries, Cornelius Agrippa has fought against an evil that has threatened to corrupt and destroy everything good and untainted in the world. Now, Max has joined the battle. It wasn't his idea to fight a demonic entity that can become anything it wants: an undying monster or the most desirable woman in the world. Max has been chosen by fate to fight those who would use magick to destroy freedom and wreak havoc on an unsuspecting world. Along with Agrippa and Valerie Drake, a beautiful, talented singer, Max is the only hope of the free world.

Steve Englehart is best known for writing for such comics series as Spider-Man, Captain America, Superman, The Fantastic Four, and Batman for DC and Marvel Comics, and for his novels The Point Man, The Long Man and The Plain Man. He has been named Favorite Writer at the Eagle Awards, and has also won an Inkpot Award for his comics work. He lives in the San Francisco Bay area, where he is currently working on a new Max August novel.

The Quest for the Trilogy
Mel Odom