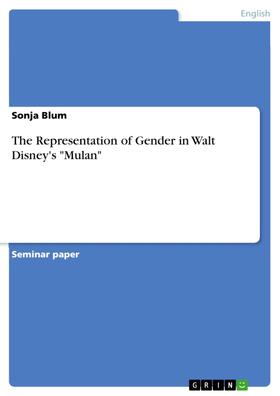 The Representation of Gender in Walt Disney's "Mulan"

Beschreibung zu „The Representation of Gender in Walt Disney's "Mulan"“

Seminar paper from the year 2007 in the subject American Studies - Culture and Applied Geography, grade: 1,7, University of Osnabrück (Institut für Anglistik/Amerikanistik), course: Introduction to Gender Theory, 28 entries in the bibliography, language: English, abstract: 'How can they tell if I am male or female?' With this last line of 'The Ballad of Mulan' the (anonymous) author raises the gender question already in the 6th century.
In this essay, I would like to analyse The Representation of Gender in Walt Disney’s 'Mulan', using the structure of the movie to focus on The Protagonist Fa Mulan, the Treatment of Women and the Depiction of Men. Additionally, the inquiry concerning the Meaning of Song Texts in Disney’s 'Mulan' appears useful as these always play an important role in conveying movie themes.

In order to establish a connection to the seminar on which this paper is based, I will illustrate how the movie is a good example for Judith Butler’s theory of Gender as Performance. Last but not least, I would like to show the Influence of Disney’s 'Mulan' on Society because fairy tales and movies '[…] do influence the manner in which children conceive the world and their places in it […]'.
Drawing the 'Conclusion', I will try a careful approach to find out if Disney’s 'Mulan' might even be considered as a feminist movie. (...)

An Introduction to the Concept of Error Analysis
Robert Wetzorke