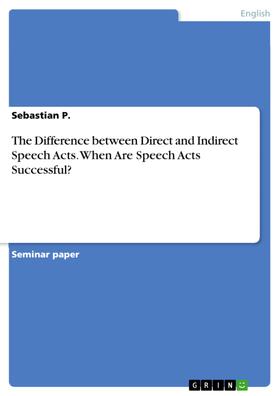 The Difference between Direct and Indirect Speech Acts. When Are Speech Acts Successful?

Beschreibung zu „The Difference between Direct and Indirect Speech Acts. When Are Speech Acts Successful?“

Seminar paper from the year 2016 in the subject English Language and Literature Studies - Linguistics, grade: 1,0, Technical University of Braunschweig, course: Approaches to Meaning, language: English, abstract: This term paper will deal with speech act theory, especially with the success of speech acts depending on certain conditions. Due to the usage of direct and indirect speech acts in everyday conversations it will be analysed which conditions have to be fulfilled to have a successful speech act. The following theories will be used to answer the research question whether the same conditions have to be fulfilled for direct and indirect speech acts to be successful:

The hypothesis is that indirect speech acts are different than direct speech acts due to the demanded hearer uptake and the possible ambiguity. After giving definitions of important linguistic terms and theories, the success of utterances and conversations in general will be described by the help of the Cooperative Principle by Grice. Then different examples of Direct and Indirect Speech Acts will be analysed that will show the difference between the two forms. Some of the used examples are made up and some are dialogues taken from the TV-series “The Big Bang Theory” as well as “The Walking Dead”. To explain how one can interpret the implicature in an utterance, the inference theory by Gordon and Lakoff will be taken into account. In the end it is made clear that the success of Indirect Speech Acts depends on the context in which the utterance is made and also on other external conditions which the speaker cannot control himself as the speaker often requests a hearer uptake.

Different texts by Austin, Thomas, Levinson, Renkema, Cruse and Yule will be studied to get an answer to the research question. Special focus will be put on the Indirect Speech Acts as they can be ambiguous and ask for a hearer uptake to be successful.

Ähnliche Titel wie „The Difference between Direct and Indirect Speech Acts. When Are Speech Acts Successful?“

Recalling Political Messages: About the Framing of a Presidential Speech and Its Subsequent News Coverage
Sophia Schulze

The Representation of Gender in Walt Disney's "Mulan"
Sonja Blum