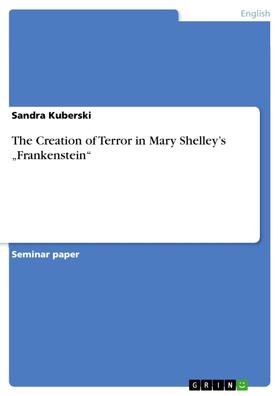 The Creation of Terror in Mary Shelley’s „Frankenstein“

Beschreibung zu „The Creation of Terror in Mary Shelley’s „Frankenstein““

Seminar paper from the year 2011 in the subject English Language and Literature Studies - Culture and Applied Geography, grade: 1,3, University of Constance, course: British Literature & Culture, language: English, abstract: During the last two centuries, Frankenstein gained the reputation of a modern myth. Every generation gets to know Frankenstein within a new historical and social context. So it has to be said that the reception of Shelley’s masterpiece changed over the years. The creature of Victor Frankenstein became the archetype of a monster, a model for many specters that followed.
Mary Shelley was born on 30 August 1797 and died on 1 February 1851 at the age of 53. She was the daughter of the philosopher William Godwin and his wife Mary Wollstonecraft, who was known as a philosopher and feminist. Both her parents had talents in writing and this talent should be inherited to their daughter as well. In 1816 she married her lover, the famous poet Percy Bysshe Shelley.
In the summer of 1816 the famous couple went on a journey to Switzerland, accompanied by Mary’s stepsister Claire, who arranged for them a meeting with her lover Lord Byron. During their stay at the Villa Diodati in Geneva the group talked about science and inspired by some German ghost tales decided to have a ghost-story contest, which led to the initial draft of Frankenstein. Mary Shelley’s tale is the only one of those stories which has been completed. The first edition of Frankenstein was released in 1818, another one in 1831, changed and corrected by Mary Shelley herself.
The romantic period was among other things also the time of an enormous paradigm shift in science. The Frankenstein novel has this shift as a basis and combines scientific horror with elements of traditional Gothic fiction. The turn of the century also brought a growing interest in landscape and nature. In 1757 the Irish philosopher Edmund Burke released “A Philosophical Enquiry into the Origin of Our Ideas of the Sublime and Beautiful”, which became the most important treatise on the concept of the sublime.
This seminar paper shall examine the way in which Mary Shelley creates an atmosphere of terror in her novel. Therefore both the preface of the 1818 version of Frankenstein, written by Percy B. Shelley, as well as the 1831 introduction by Mary Shelley shall be analyzed on the author’s original intention and the idea behind Frankenstein. Then a definition of the term “terror” will be given, followed by a chapter on the concept of the sublime as seen by Edmund Burke and Ann Radcliffe. The last chapter examines “terror” within the story itself, as well as the terror achieved through other features, for example the sublime.

Is the contest between Edmund Burke and Thomas Paine as much a matter of style as politics? A comment

Shakespeare, With Introductory Matter on Poetry, The Drama, and The Stage by S.T. Coleridge
Samuel Taylor Coleridge