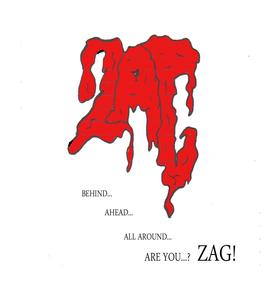 Where are the voices? Where is the rumbling of cars, the chatter of TV’s and radios? You forget. The pulse of life. The thrumming heart of the world that used to be. The heart has ceased to beat, but the bodies move on.

Em laid her heavy head upon her arms. She sat in the silent office of a dead man. The picture of his wife and kids looked vacantly at the black hat covering her head. She thought of them; the blonde woman and her two little boys. They’re dead too. Dead, and wandering killers now. Em’s hand caressed the cold steel of the gun that rested on the desk blotter. Only one way to be sure I never am.

Her mind sank into oblivion, drifting from memory to thought to fantasy in a tortured, yet dreamy way. When her ears picked up the rhythmic clink of metal, she listened for long seconds before realizing the sound was real. Her eyes flew open. Em swiped the gun into her knapsack as she bolted from the manager’s office.

The glass of the window shook with the impact of Em’s inertia as she slammed into it. Looking down into the lot of lifeless cars, Em spotted the roving band of men approaching. One led them, his sharp yellow eyes visible over the barrel of his own steel. Those strange eyes flicked across the second story windows, just as Em ducked her head and disappeared.

My stash! Her mind raced to the priceless cans of food on the lower level, her feet barely keeping pace. Em didn’t think about what else awaited her down there…

She slid along the railing of the linoleum stairs and bounded past the deli counter. The noise she heard behind her; the sloppy, guttural grunts sent a jolt of pure terror between her shoulder blades. She froze, watching Them hunt her. Fresh blood dripped from their mouths; soon it would be hers. The battered aisles stretched out before her like an obstacle course. Instinct moved her feet before reason could interfere. Em ran for her life, hoping desperately that the unknown humans she was about to encounter would prove less dangerous than the bloodthirsty monsters at her heels.