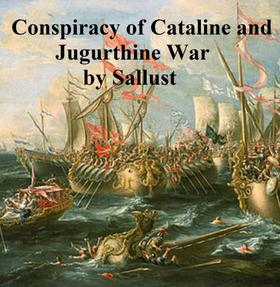 Conspiracy of Cataline and Jugurthine War

A literal translation. According to Wikipedia: "Gaius Sallustius Crispus, usually anglicised as Sallust (86 BC – c. 35 BC) was a Roman historian, politician, and novus homo from a provincial plebeian family. Sallust was born at Amiternum in the country of the Sabines and was a popularis, opposer of the old Roman aristocracy throughout his career, and later a partisan of Julius Caesar. Sallust is the earliest known Roman historian with surviving works to his name, of which we have Catiline's War (about the conspiracy in 63 BC of L. Sergius Catilina), The Jugurthine War (about Rome's war against the Numidians from 111 to 105 BC), and the Histories (of which only fragments survive). Sallust was primarily influenced by the Greek historian Thucydides and amassed great (and ill-gotten) wealth from his governorship of Africa."