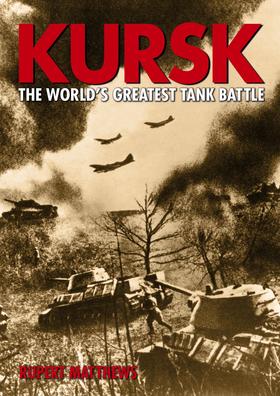 Beginning with the strategic situation in 1943, this compelling tale recounts the circumstances that led to this decisive battle that was a key turning point of the Second World War on the Eastern Front. Considered by both the Germans and the Soviets to be a highly unpromising place to fight a battle, Kursk would prove the undoing of the Germans. Never again would they be able to mount a major offensive to the east and never again was the end result of the war in doubt. The road to Berlin was open, even though another two years would pass before the Red Army marched into the German capital. Recalling the various stages of the fighting, the early tactical advantage of the Germans and the subsequent Soviet victory, The Battle of Kursk is a fascinating account of a major campaign that involved more than 3 million men, 8,000 tanks, 40,000 guns and 5,500 aircraft.

Rupert Matthews is a long-established historical writer with numerous books to his name, including Hitler: Military Commander, The Age of the Gladiators, Usurpers and Kingmakers, a biography of the American artist Frederic Remington, and The 20th Century in Pictures, a photographic review of the century. Rupert is married to Joanna and lives in Surrey.