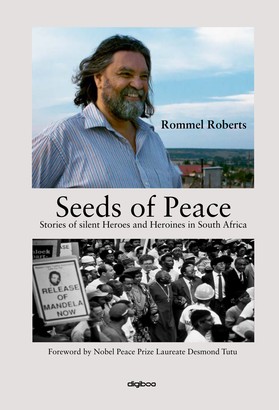 Stories of silent Heroes and Heroines in South Africa

Seeds of Peace: Stories of silent Heroes and Heroines in South Africa

"In South Africa, the struggle for freedom was won largely through non-violent means – 95% of the struggle was non-violent. The non-violent foundations laid in the preceding years are, I believe, what made our peaceful transition to democracy possible in 1994." (Rommel Roberts)

Rommel Roberts words express his conviction which was underlying all his efforts as an activist opposing the apartheid regime in South Africa.
In his book ‘Seeds of Peace’ Rommel Roberts wants to focus on ordinary people who with their courage and commitment have achieved a change in South African conditions but have never been recognised and acknowledged.
In all his stories of brave women and men and in all forms of protest and human rights activities in which Rommel Roberts played a key role this incredible spirit of non-violence was prevalent and finally successful.

"Moved by stories from our history! This book tells us stories of simple people. Most of them are women. Rommel Roberts tells us about the dynamic roles these simple people played. The stories create a window through which we are looking at portraits of people who through their faith and action made a difference. These are untold stories of heroes, of courageous but voiceless people that I represented when I was awarded the Nobel Peace Prize. But unfortunately the world will never know these people in whose name I was speaking and preaching. Thank God Rommel Roberts tells us some of these stories now, and we can at last put names, even faces to some of these unknown heroes. [...] Rommel, you have persevered! God bless you."
Desmond Tutu, (Excerpt from the preface)