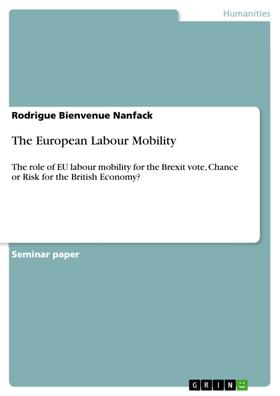 The role of EU labour mobility for the Brexit vote, Chance or Risk for the British Economy?

Seminar paper from the year 2016 in the subject Sociology - Individual, Groups, Society, grade: 2.4, Ruhr-University of Bochum (Lehrstuhl für Sozialpolitik und Öffentliche Finanzen), course: Labour Mobility: An Economic Perspective, language: English, abstract: In December 2015, the EU Referendum Act received the Royal Assent and became more probable. This legislation gave Britain the possibility to organize a Referendum about UK´s continuing the membership in the European Union. The United Kingdom held a referendum on June 1975 to become a member of the European Union and in that year, this referendum was called Common Market referendum and EEC membership. The electorate expressed significant support for the EEC membership, with up to 67 per cent in favour on a 65% turnout. After the EU Referendum Act made the referendum more probable, business and individuals started considering the potential impact of the UK leaving the EU, often referred to as a "Brexit". Former Prime Minister David Cameron with his government started negotiating with the EU representatives about a possible way to give more power back to the UK Government. The negotiations were about some potential changes to the UK´s existing EU membership; new terms have been agreed or more clarity received.

The UK´s relationship with the EU has been controversial ever since the Treaty of Rome established the later. Indeed, public opinion polls since 1992 demonstrate a majority opinion amongst the UK electorate that remains critical of the EU, with a not insignificant number desiring withdrawal. Even successive governments and British establishment e.g. Lord Hanley, 3 July 1995, House of Lords claimed the huge benefit of remaining in the EU, the public opinion wasn´t really pro EU.

Would the UK Benefit from Leaving the EU at the Next Proposed Referendum?
William Garner