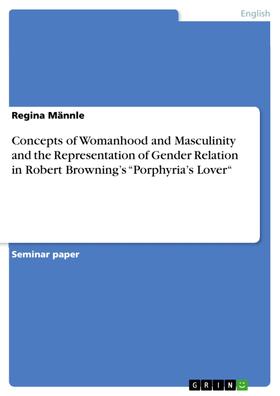 Seminar paper from the year 2006 in the subject English Language and Literature Studies - Literature, grade: 1,3, University of Freiburg (Englisches Seminar), course: Proseminar I, 18 entries in the bibliography, language: English, abstract: Without a doubt, the Victorian age can be considered as a very vibrant era, an age of change and development, a time of expansion, reforms and of technological and scientific advance. It was only natural that these changes would affect the traditional religious and social beliefs and conventions, as well. The conventional gender system with its strict hierarchy and role expectations was mostly still intact and sexuality and corporeality were considered to be taboo subjects. Nevertheless, it was exactly this attempt to avoid sexuality and gender topics which led to sometimes excessive discussions about these issues, for example the so called “Great Evil” of prostitution and related to that the enforcement of the Contagious Disease Acts in the 1860s. These discussions, however, made many Victorians – for example the “New Women” that formed the basis for the later on emerging feminism – aware of the injustice of the status quo and led to a questioning of the traditional separate spheres ideology. The ideas of womanhood and masculinity had to be discussed and to be adapted to a new age. Although the stereotype of the “uptight Victorian” lives on until today, the literature of this time – since literature always mirrors the cultural climate of the society in which it came into being – demonstrates the Victorian’s interest in gender questions. In this paper Robert Browning will serve as an example for a poet highly aware of these ongoing changes. In his dramatic monologue “Porphyria’s Lover” he takes up the gender issue and deals with femininity, manliness and sexuality. The first chapter of this paper will give some information about the form of the dramatic monologue as a special means to present a person’s inner life and furthermore, will deal with the conventional idea of gender in the Victorian age. On the basis of this more general infor-mation, the second chapter will have a closer look at the poem itself and will compare the concept of gender roles and the construction of gender relationship designed by Browning with the traditional gender ideology. Browning’s way of dealing with this issue will be taken as one example for the Victorian’s awareness of the complexity of the gender question.