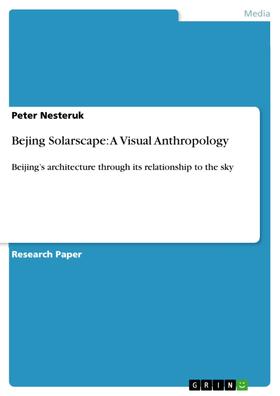 Beijing’s architecture through its relationship to the sky

Research Paper (postgraduate) from the year 2012 in the subject Art - Architecture / History of Construction, , language: English, abstract: This book will be the first to offer an analysis of a city through its upper zone and the distinctive architectural features that make up this zone, at once a mode of human experience and a unit of the environment which exceeds single buildings, and so to deploy specially developed concepts (previously used in performance theory and ritual analysis and applied to the image) to further the analysis of the urban scene. What will be described will be a ‘felt environment’ allied to a rhetoric of architecture based upon an entirely original way of dividing up, or conceptualizing, urban space.. This book will offer an insightful yet playful decoding of our experience of the built environment applied to Beijing as an exciting, largely newly-built world-city, whose buildings stand in need of a commentary – especially the official ones and, by no means least, the ‘big name’ ones (CCTV and the Olympic/National stadium or ‘Bird’s Nest’).