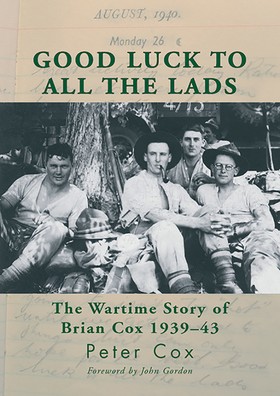 Good Luck to All the Lads

Beschreibung zu „Good Luck to All the Lads“

‘Good luck to all the lads.’ Brian Cox wrote those words in his diary on 26 August 1940, just before he and his mates from 9 Platoon of 27 (Machine Gun) Battalion experienced enemy action for the first time in the Western Desert. A Nelson College old boy, Brian enlisted to do his duty and to take part in ‘a great adventure’. But when he came home, like so many of his mates, he seldom spoke of his experiences. It was only a chance question, some 25 years after Brian’s death, that triggered his son Peter’s search to discover what his father had done during the Second World War. Brian’s personal diaries and the photographs he had brought home were a good start, but much more was needed: material from the official war histories and archives, and, best of all, memories from men who had fought alongside Brian.

In 2007 Peter Cox and his wife Robin retraced Brian’s war journey in Egypt, Libya and Greece. They visited the battlefield at Sidi Rezegh in the Libyan Desert, travelled the length of Greece, following the route the New Zealand Division took, and stood on the hillside where Brian and his mates had been dive-bombed and machine-gunned.

More than one man’s tribute to his father, this is an important addition to New Zealand’s military history and a fitting memorial to the young men, a number of them from Nelson College, who bravely served, and sometimes died, so far from home.

Ähnliche Titel wie „Good Luck to All the Lads“

The Story of Assyria
James Baikie