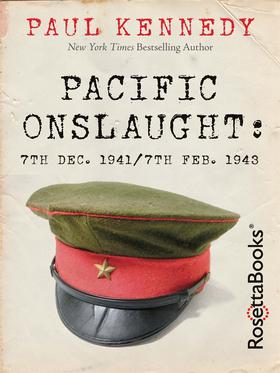 <p>Japan had mighty ambitions—to control the Western Pacific. The attack on Pearl Harbor devastated the American Pacific fleet, their primary obstacle, and they swept across the region. What ensued was a bitter struggle in which many thousands of soldiers lost their lives on both sides.</p><p>This is the first book in Paul Kennedy’s chronicle of the Pacific conflict in World War II, concluded in <i>Pacific Victory</i>. Featuring a new introduction by the author, this book provides a close, step-by-step narrative of the Japanese expansion into the Western Pacific during some of the most brutal years of World War II. Offering contemporary analysis of war strategy, it includes a riveting look at Japan’s tightening grip on Hong Kong, New Guinea, the Philippines, and other key strategic locations—and the Allies’ inexorable struggle against it. These works on the War in the Pacific are as gripping today as when they were first published.</p>

&lt;p&gt;Internationally recognized for his riveting accounts of critical points in 20th and 21st-century history, renowned British historian Dr. Paul Kennedy is the author of numerous best-selling works of history including the &lt;i&gt;New York Times&lt;/i&gt; best sellers &lt;i&gt;Engineers of Victory: The Problem Solvers Who Turned The Tide in the Second World War &lt;/i&gt;and &lt;i&gt;The Rise and Fall of the Great Powers,&lt;/i&gt; which has been translated into 23 languages worldwide.&lt;/p&gt;&lt;br&gt;&lt;p&gt;A professor of history at Yale University, Dr. Kennedy writes regularly for &lt;i style=&quot;font-family: Arial, sans-serif; font-size: 12pt;&quot;&gt;The New York Times&lt;/i&gt; and &lt;i style=&quot;font-family: Arial, sans-serif; font-size: 12pt;&quot;&gt;The Atlantic&lt;/i&gt;. He writes a monthly column dealing with global issues in contemporary society, distributed to an international audience through the Los Angeles Times Syndicate. He was chosen as a Commander of the Order of the British Empire in 2001 and nominated as a Fellow of the British Academy in 2003. In 2005, he earned the Caird Medal from the National Maritime Museum for his work in naval history.&lt;/p&gt;

The Roots of Appeasement
Martin Gilbert