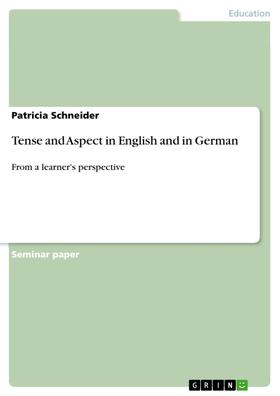 Tense and Aspect in English and in German

From a learner's perspective

Buchbeschreibung zu „Tense and Aspect in English and in German“

Seminar paper from the year 2009 in the subject English - Pedagogy, Didactics, Literature Studies, grade: 1,3, University of Freiburg (Englisches Seminar), course: Proseminar I: Contrastive Linguistics, language: English, abstract: As English and German are both Germanic languages they are closely related. However, there are still a lot of differences to be found when comparing the two languages. This is among other things due to the fact that English and German represent different language types. Among the grammatical categories relating to which the two languages can be analysed, tense and aspect are certainly salient. Before starting to analyse both languages with regard to these categories, the difference between tense and aspect has to be clarified. Tense is both a deictic and a relational category. Therefore it locates an event on the time line usually with reference to the time of speaking. Aspect, by contrast, does not locate an event or situation on the time line nor does it relate the time of one situation to another. It is rather concerned with “the internal temporal constituency of one situation”.
This term paper will examine how English and German differ in their use and expression of tense and aspect taking the perspective of a learner. First the three stages of tense and aspect acquisition by learners will be described in general terms. Particular attention will be paid to the influence of instruction on the learners. Then this term paper will examine how English and German differ in their use of tense. This will be illustrated on the example of the different uses of the perfect. Afterwards the focus will be on aspect. While English uses the progressive to indicate a change of aspect, there is no such formal equivalent in the German language. Therefore German learners of English are confronted with the question of how to express this “internal constituency of one situation” in their mother tongue. Various devices that are used by German learners of English to express the progressive will be exemplified. Both the section on tense and the section on the progressive will conclude with a focus on the difficulties for and the typical errors made by the learners. However, as there is no material available concerning English learners of German, only the German learners of English will be taken into account.

Ähnliche Bücher wie „Tense and Aspect in English and in German“

Tense and Aspect - The Past Perfect
Sandra Schwesinger