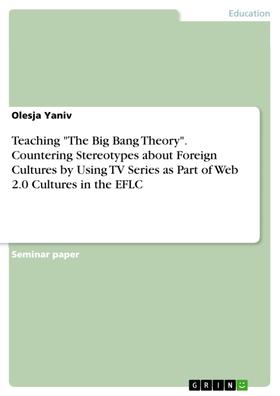 Teaching "The Big Bang Theory". Countering Stereotypes about Foreign Cultures by Using TV Series as Part of Web 2.0 Cultures in the EFLC

Seminar paper from the year 2016 in the subject English - Pedagogy, Didactics, Literature Studies, grade: 1,3, , course: Teaching English as a Foreign Language, language: English, abstract: The television and internet, which enables permanent access to television shows, are two of the most popular media of our millennium and, thus, play a significant part in people´s private life as well as in the occupational area. Thus, a transition of industrial society into an information society has been fulfilled since the end of the 1960s and includes a digitalized and interconnected world for the greatest extend. Those changes affect the whole everyday reality; an increasing number of all ages spend their time in front of monitors inside a virtual reality.

The kind of learning has changed as well. For the young generation – the so called “digital natives” – the constant networking and opportunity of gaining knowledge easily became obvious. The digital learners should not “consume” rehashed knowledge anymore but need to be able to have the ability to use available knowledge and information, screen those usefully and thus, reach efficient learning outcomes. Hence, media literacy becomes a key qualification to participate in the information society.

The combination of both, the television as a part of our lives and new digital learning, enables absorption and participation in foreign cultures, values and perceptions by the digital learners. Especially American lifestyle is influencing us in our everyday life. We see films and series from America and we use American products; but students are not always aware of how they adapt to the American lifestyle through watching American films or series. “The Big Bang Theory” is a good example of how the Americans and foreigners who live in America present themselves and how we get prejudices against other cultures with different cultural background which are presented in episodes of the series.

In the course of lifelong learning and concomitant increasing compulsion to flexibility of learning, series as a form of e-learning can represent an efficient media to realize a new culture of teaching and learning about cultures. By considering the aspects of education and intercultural learning written in the scholastic standards, it is necessary to examine the series “The Big Bang Theory” concerning its features and potentials, possible applications in the English foreign language classroom.

From American History to Hollywood Screening. Black Stereotypes in Griffith's "The Birth of a Nation"
Alina Müller

The Big Bang Theory: Behind the Scenes of the Hit TV Show
Christina St-Jean

The Difference between Direct and Indirect Speech Acts. When Are Speech Acts Successful?
Sebastian P.

Human Occupation. Introduction to the theory and practice of occupational therapy
Linda Mathews