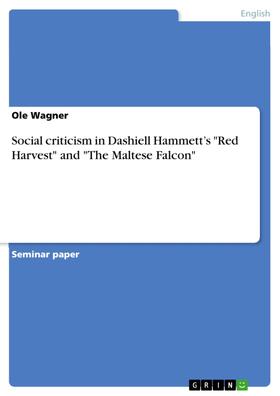 Seminar paper from the year 2007 in the subject English Language and Literature Studies - Literature, grade: 1,7, University of Heidelberg (Anglistisches Seminar ), course: Twentieth Century Crime Fiction, 12 entries in the bibliography, language: English, abstract: This essay will explore how social criticism is performed in two novels of Dashiell Hammett. Red Harvest is often described as “the first hard-boiled novel”, giving it the status of a literary landmark. Here the author gives us a clear impression of his characteristic world and his social vision of it. Therefore, the novel appears to be an interesting subject to look how this kind of literature employs social criticism.
The other book that will be examined here is The Maltese Falcon, one of the most popular and best known hard-boiled crime novels ever, that has served as a model for many authors. As Robert Shulman argues, Hammet gives his “social vision its fullest expression” in this novel, showing “his concern with American individualism”. Thus, as this examination is limited to two works, it seems most sensible to use The Maltese Falcon along with Red Harvest for this purpose to produce a good insight into the social criticism in Hammett’s books.
Before beginning with the study, it is necessary to make clear what ‘social criticism’ is here, as the term itself has a wide meaning. ‘Social’ will be discussed in the sense, as the Merriam-Webster dictionary puts it, “of or relating to human society, the interaction of the individual and the group, or the welfare of human beings as members of society”. This means that in a smaller sense, the term ‘social’ concerns the way the individuals, the characters of the novels, deal with each other, and, in a larger sense, how the society is organized and how its institutions treat the individual and the group, which also brings economic and political components into the scope of the study.
The Maltese Falcon and Red Harvest are particularly well suited for such a study, as they both use distinct, in some points different, in some points similar ways to criticize. They also provide a look at different issues, therefore the essay will be able to cover a greater area combining the research results from the two novels.
First, the essay will focus on the wider relations in society, the political and economical and the legal. Then, the individual relations among the characters and the criticism of them will be observed. Later, this work will also explore how the society influences the individual – here the hero – in his actions.

A Nobody Throughout the Ages
Mate Madunic

A survey on John Steinbeck's "The Grapes of Wrath"
Bernd Steiner

“Gentlemen, Be Seated!” The Rise and Fall of the Minstrel Show
Marc A. Bauch