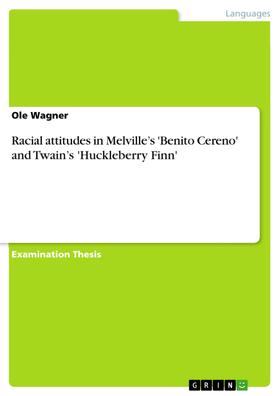 Examination Thesis from the year 2008 in the subject English - Literature, Works, grade: 1,0, University of Heidelberg (Anglistisches Seminar), language: English, abstract: The American literature is a reflection of the socio-political developments in the different stages of the history of the country, and especially slavery is a crucial topic in it. Many works dealing with slavery have been published in the 19th, 20th and 21st century, and some of them have sparked debates that are not only on literary issues. Two of these are Herman Melville’s (1819-1891) Benito Cereno (1855) and Mark Twain’s (1835-1910, born Samuel Langhorne Clemens) Adventures of Huckleberry Finn (1884). These two novels are often seen as major works in American literary history, and their authors are among the country’s most celebrated. Both books have in common that their stories play in the time before the abolition of slavery. Benito Cereno deals with a slave revolt on a ship, while Huckleberry Finn depicts the adventures of its eponymous hero and a runaway slave, Jim. Another feature the novels share is the fact that both have been charged to contain racist and pro-slavery attitudes. This paper will evaluate and analyze these assertions in order to show that they are false because they are based on misunderstandings. It aims to provide a profound delineation of the racial attitudes in the two novels.
The assumption here is that neither Melville nor Twain wrote racist novels. This shall be proven with the help of a close analysis of the narrative perspectives and literary devices used in the books. Both of the stories, as will be shown later, are told by narrators that are far from being easy to grasp without a deeper examination of their character and function. A comprehensive insight into these appears to be beneficial for a better understanding of both of the novels.
The present paper will begin with an exploration of the individual attitudes of the two authors. Although the knowledge of writers’ opinions can never be used as the sole key to a literary work’s interpretation, it can still be helpful to gain an insight into his ideas about the world he or she depicts in his or her fiction. After this, the two novels will be dealt with separately. In a first step, the assertions about each one’s racism will be delineated. Then, the narrative perspectives and other literary techniques will be thoroughly analyzed. In a last step, the novels’ racism will be evaluated with the help of the insights gained about the techniques used. It shall be shown that in the light of this, neither Benito Cereno nor Huckleberry Finn are racist books.

Racism in the Adventures of Huckleberry Finn
Jakob Knab