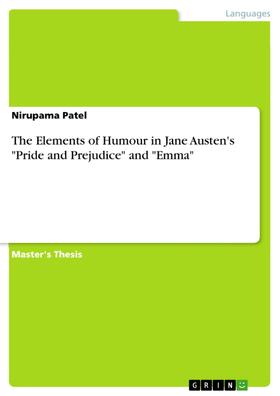 Master's Thesis from the year 2011 in the subject English - Literature, Works, grade: A, , course: M.Phil, language: English, abstract: Among novelists Jane Austen ranks as a supreme mistress of comedy. She brought with her task of social comedy a singular combination of rare gifts - a wit and satire of wonderful delicacy, a mind of great penetration, a style absolutely pellucid and effortless. No novelist has ever been more thoroughly an artist both in her attitude towards her own work and in her respect for her own limitations. She is so impersonal in her attitude that one may seek in vain for any trace of her own opinions or thoughts in her writings. Within her own limits she comes as near perfection as any human genius can.

One of the world's most popular novels, Jane Austen's "Pride and Prejudice", has delighted readers since its publication with the story of the witty Elizabeth Bennet and her relationship with the aristocrat Fitzwilliam Darcy. Similar to Austen's other works, Pride and Prejudice is a humorous portrayal of the social atmosphere of late eighteenth- and early nineteenth-century England, and it is principally concerned with courtship rituals of the English gentry. The novel is much more than a comedic love story, however; through Austen's subtle and ironic style, it addresses economic, political, feminist, sociological, and philosophical themes, inspiring a great deal of diverse critical commentary on the meaning of the work.

Social Conventions and Courtship in the 18th Century. Challenges for Independence and Genuine Love Displayed in Jane Austen’s “Pride and Prejudice”
Parwez Paryani

The Portrait of a Lady (The Unabridged Edition)
Henry James