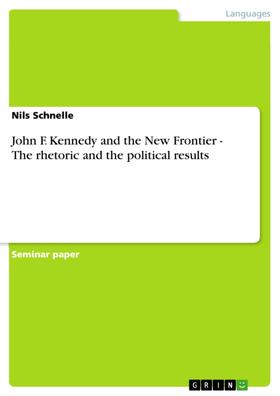 John F. Kennedy and the New Frontier - The rhetoric and the political results

Buchbeschreibung zu „John F. Kennedy and the New Frontier - The rhetoric and the political results“

Seminar paper from the year 2005 in the subject Rhetoric / Elocution / Oratory, grade: 1,0, Catholic University Eichstätt-Ingolstadt (Lehrstuhl für Amerikanistik), course: Proseminar "American West - Myths of the Frontier", 12 entries in the bibliography, language: English, abstract: This work examines the use of the pioneer myth in Kennedy's rhetoric and the transfer of the frontier image of the American West to the situation at the beginning of the 1960s. Two of his speeches, the "Nomination Acceptance Speech“ and the “Remarks at the Dedication of the Aerospace Medical Health Center” are interpreted and analyzed. In this part of the paper, the literary aspects of the speeches are examined, most importantly the theme of the "New Frontier". Furthermore, his political performance is evaluated and compared to the contents of his speeches; the idea is to examine whether or not Kennedy delivered what he promised and to evaluate his presidency in accordance with the means of political science.

Ähnliche Bücher wie „John F. Kennedy and the New Frontier - The rhetoric and the political results“