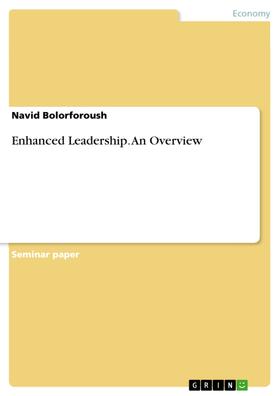 Seminar paper from the year 2015 in the subject Business economics - Business Management, Corporate Governance, grade: A, , course: MBA, language: English, abstract: Leadership has been a topic of investigation for many decades due to competitive nature of the global economy and emergent prominence of corporate governance. The literature on the topic is abundant and wide range of existing studies can seem disjointed at times. However, over the past 80 years, leadership theories have seen four key generations: trait theories, behavioural, contingency and transformational theories. It is important to note that these theories are not merely exclusive or comprehensive on their own but follows a progressive pattern (Maurik, 2001). This means that there have been elements added or included from one generation to the next that link one to the other and the root can be traced back to sixteenth century in military history, major religions and politics (Safferstone, M., 2007). This is because most significant organisations in the eighteenth and nineteenth century were ‘military’ with strong hierarchical structure. In such frameworks leadership played a major role in creating stability and maintaining the status quo. Whilst the principles used were to manage conflicts, control crisis or even convince groups to acts as desired, the values and perceptions related with management and supervision were not clearly defined (Douglas, 2010). Therefore, many intellectuals argue that the old/traditional theories related to leadership and management may not suit contemporary organisational structures. Nevertheless, most traditional principles stress on common characteristics and behaviours that a leader possesses and his unique ability to control, direct and influence followers to desired outcomes (Gibney, 2009). On that note, Burns (1978) argues that the notion of leadership formed with emphasis on leaders’ traits and personalities and these characteristics are still emphasised in contemporary organisations and cannot be overlooked. [...]

Overview of Basics and Types of Fermentation
Manoj Parakhia

The Method. An Overview of Acting Theory According to Konstantin S. Stanislawski and Lee Strasberg
Katharina Mrak

An Overview of the Active Perception Theory
Damir Ibrisimovic