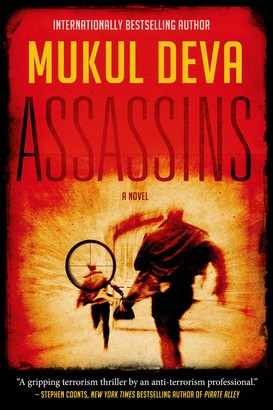 International bestselling writer Mukul Deva thrills again in Assassins, the scorching sequel to Weapon of Vengeance.
Seven years after they conspired to kill Pakistani politician Benazir Basheer, two men, Pakistani Premier Asif Zardosi and ex-dictator General Pervaiz Masharrat, will reach Delhi on the very same day. Also converging on Delhi is assassin Leon Binder, who is seeking to bring down the curtain on a deadly three-decades-long career with a spectacular double hit.

Standing between Leon and his targets is one man: retired Inspector General of Police Ravinder Singh Gill. But Ravinder is reeling from the death of his daughter, Ruby, and for failing to prevent her from destroying the Israeli-Palestinian peace summit. His self-confidence has been shattered. To make matters worse, his mission becomes immediately treacherous when his most senior officer is found brutally tortured and murdered; it is obvious Ravinder's team has been penetrated.

Will Ravinder be able to stop Leon and prevent disaster in India and Pakistan?