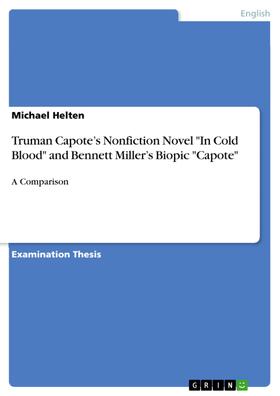 Examination Thesis from the year 2008 in the subject English Language and Literature Studies - Literature, grade: 1, University of Freiburg, language: English, abstract: When In Cold Blood was first published, critics had a hard time categorizing the book. Capote himself held that he had written a “nonfiction novel (Capote in Plimpton 1966: 2)” and that he had thereby created an altogether new genre. In the subtitle, Capote stresses his central claim regarding this new genre, assuring the reader that what she is about to delve into is “a true account of a multiple murder and its consequences (Capote 2000 [1966]).” As will be seen in the opening chapter, criticism of In Cold Blood has therefore to a great degree revolved around Capote’s and the book’s adherence to this assertion of truth. The Shorter Oxford English Dictionary on Historical Principles (SOED) lists as the three first entries under the head word “true”:

The following investigation of In Cold Blood and of the biopic based on Capote’s work on the book, Bennett Miller’s Capote (2005), will proceed along the lines of these three aspects of the definition, questioning Capote’s claim of rendering a “true account.”
The genre chapter and large parts of the ensuing discussion of In Cold Blood will be especially concerned with the definition’s third aspect, In Cold Blood’s consistency with fact and its conformity with reality. The question will be raised as to whether or not a true account of real events is possible at all, and in what ways Capote and other writers of New Journalism, as the genre is most frequently called today, have tried to achieve such true accounts.

Deceptions of the Enemy - What Does God Say?
Lynda Turner

The Meaning of Truth
William James

I Believe in Me
Connie Bowen