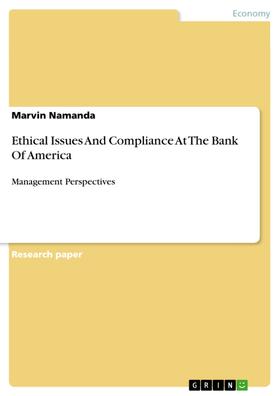 Ethical Issues And Compliance At The Bank Of America

Beschreibung zu „Ethical Issues And Compliance At The Bank Of America“

Research Paper (undergraduate) from the year 2014 in the subject Business economics - Business Management, Corporate Governance, grade: 97.00, La Trobe University Melbourne, language: English, abstract: This report analyses the external and internal business environments that could be the cause of the ethical lapses; giving steps towards mitigating the lapse. Ethical issues and compliance are a challenge facing Bank of America. Ethical issues affect all the stakeholders in a given business. There has been a perception that the financial institutions across the world tend to be more unethical than any other forms of business. This perception could be justified by the issues facing Bank of America.

Complaints of constant lapses in the ethical culture of the bank are rife. The most recent ethical scandal was where the bank is accused to be only interested in short-term returns and not paying attention to the products that are suitable for customers. According to Mujtab (2010:23), the implementation of the Payment Protection Insurance by the Bank of America is an unacceptable measure in respect to the Finance Act (2001). This insurance policy saw overdraft charges being imposed on small business account holders. Interest swaps were also charged on small business holders, a thing that is only done on large corporations by other banking institutions.

On the 25 June 2012, the Financial Services Authority (FSA) announced that it had found numerous errors in the way Bank of America had sold complex financial products to around 25,000 small and medium sized businesses. These interest swabs were designed to protect small-sized business customers. However, the mis-selling by the bank resulted to severe effects on the small businesses. The ethical concerns raised here were that the policy was too complex for the business owners to appreciate and that the product was conditional upon the clients. The bank has come under immense public condemnation calling for cultural and management change.