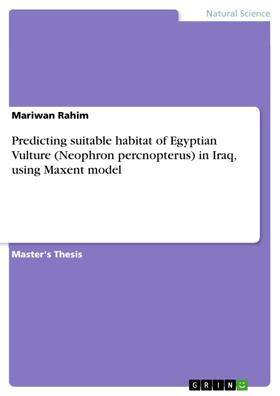 Master's Thesis from the year 2014 in the subject Biology - Ecology, grade: 53.60, , course: Applied Ecology and Conservation, language: English, abstract: Species distribution modeling to predict and map appropriate habitat for endangered species is critical for monitoring and restoration of their population decline in natural habitat. However, data on distribution of endangered species are limited. Egyptian Vulture (Neophron percnopterus) is one of the endangered species in the world that its population has been declining by 50% in the last three decade.

The model performed very well. The AUC value is 0.870, which is better than random prediction. The results indicate that one of the precipitation inputs, bio_13, contributed 54.3% to the final description of potential habitat for the Egyptian Vulture. This provides evidence that precipitation, particularly precipitation of wettest month, is the most significant variable in the model’s determination of suitable habitat locations. Several of the highest suitability points predicted by Maxent are associated with known Egyptian Vulture presence and some of them match with KBAs. But, there are a number of locations, which were predicted to have high suitability of habitat for Egyptian Vulture, are located outside KBAs.

This study is important to do more fieldwork for predicted high suitable area for Egyptian Vulture in the future and protect them from population decline.

Origin and significance of the Great Pyramid
C. Staniland Wake

The failure of US intelligence in Iraq
Robert Fiedler

The City of the Caliphs
Eustace Alfred Reynolds Ball