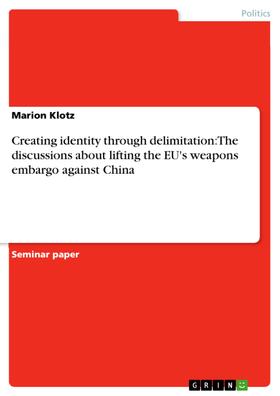 Creating identity through delimitation: The discussions about lifting the EU's weapons embargo against China

Beschreibung zu „Creating identity through delimitation: The discussions about lifting the EU's weapons embargo against China“

Seminar paper from the year 2006 in the subject Politics - International Politics - Topic: European Union, grade: 1,0, Johannes Gutenberg University Mainz (Institut für Politikwissenschaft), course: Hauptseminar "China in World Politics", 40 entries in the bibliography, language: English, abstract: The EU′s weapons embargo on China has been in place since the Tiananmen Square Massacre in 1989. After some aspects of the embargo had been lifted in the autumn of 1990, there was no real discussion about the relevance and the necessity of it for years. In 2003, however, some European states, notably France and Germany, suggested that the embargo should be lifted in order to normalize the relationship between the EU and China and to pave the way for further economic and political ties between the two powers. Predictably, the United States has since been lobbying vehemently against lifting the embargo. In early 2005, the decision was postponed after massive US pressure as well as the ratification of the Chinese Anti- Secession Law in which the PRC threatened to use military force against Taiwan. Furthermore, inner- European problems with the ratification of the new constitution lead to stalling of other projects, including the Code of Conduct and the Toolbox without which the embargo cannot be lifted. The question itself has not been forgotten, however, and most analysts expect the embargo to be lifted sooner rather than later. A rift in the transatlantic relationship between the EU and the US thus seems unavoidable.


The European Union as well as the PRC emphasize that lifting the embargo would be a symbolic move rather than the prelude to increased weapon transfers from Europe to China. The question remains, however, why the EU would "see benefit in the symbolic change of policy . . . when it would cause such anxiety in the heart of arguably their most significant true partner in the national security arena" (David Shambaugh, see Lawrence 2004: 28). One basic assumption of this paper is that the EU is not, as some critics put it, blind towards the strategic implications of a change in Chinese military power and power projection capabilities for the region and the international community. Rather, there must be different goals and aims of the European Union that outweigh the strategic doubts, most notably the European need for a newly constructed identity.

Does the rise of Emerging Powers challenge the existing notions of development?
Florian Meyer

Politics of sanctions. Impact of US and EU sanctions on the rights and well-being of Zimbabweans
Chidiebere C. Ogbonna

Is the idea of a Jewish State anachronistic, based on 19th century ideology, and incompatible with 21st century values?
Kathrin Nina Wiedl