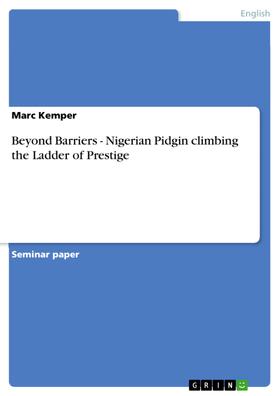 Beyond Barriers - Nigerian Pidgin climbing the Ladder of Prestige

Seminar paper from the year 2005 in the subject English Language and Literature Studies - Linguistics, grade: 1,7, Humboldt-University of Berlin (Institut für Anglistik und Amerikanistik), course: English in Africa, 25 entries in the bibliography, language: English, abstract: In times of the pre-colonial period, contact between English and Nigerian indigenous languages was hardly to recognize. West Africa came into contact with Europeans for the first time in the 15th century. The Britons were – in contrast to the Spanish and Portuguese - latecomers to the African scene, which is why the Nigerian languages did not have been influenced by the English language until the beginning of the colonial period. The unification of Nigeria in 1914 marked the starting point of her colonization. Since that point in time, contact between English and the major Nigerian languages has been increasing. Nigerian Pidgin (NP), which developed as a contact language between English and various indigenous languages, nowadays does no more fit the definition of a Pidgin as a pure contact language, for it is mainly spoken locally and not throughout the whole country. It is neither a creole, because it is not learned natively by children – at least not throughout its whole area of spreading.
To give an overview on how English, Nigerian Pidgin, and the three major indigenous languages are currently fighting to gain ground over each other in multilingual Nigeria, is the topic of this paper’s first chapter. The role of English in West Africa in general and Nigeria in particular has been examined to a larger extent in the seminar, so here the main focus is laid on NP and the other three major indigenous languages. The second part deals with the altering role of Nigerian Pidgin in terms of literature, interethnic communication, and the mass media. Regarding NP on its way to a wider spread, nowadays it already is a foregone conclusion that this way would be paved with sharp stones – those mostly put down by the administrative and governing institutions in Nigeria. This is why the last large section of this paper concentrates on prospective problems which NP – and the other major languages spoken in Nigeria - will have to cope with in the next decades. To conclude, I am shortly touching on the thoughts and questions which came to my mind while investigating, and writing this paper.

Riots and Revolutionaries - How did civil America make progress on its Road to Independence?
Marc Kemper

The Effects of Alzheimer's Disease on Language
Jenny Beyen

Development and Stages of Pidgins and Creoles towards Decreolization. A Phonological Analysis
Thomas Gantner

How was the behavior of the US in Foreign Policy from 1917 till the end of the Vietnam War and what are the different possibilities?
Julia Mahr