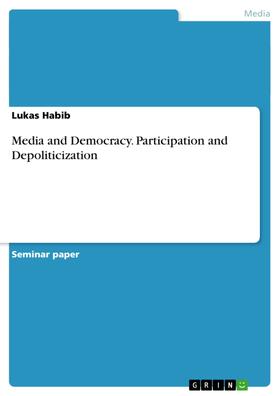 Media and Democracy. Participation and Depoliticization

Seminar paper from the year 2013 in the subject Communications - Media and Politics, Politic Communications, grade: 1,0, University of Frankfurt (Main), language: English, abstract: Without any doubt, the procedures of political work and public exercise of influence had been changed by the rise of the new media. Thus, it is worth to figure out, in which way this happened a few decades ago, in times where most public debates were held via television or newspapers. In comparison to this, there will be an analysis of the new media and its impact on democracy and in which ways it confirms the presence of an audience and paparazzi democracy, in this case primarily in Germany. To set limits, this analysis will concentrate on the aspect of a rising participation in accordance with a rising depoliticization, which might be seen as a result of the already mentioned transformation.