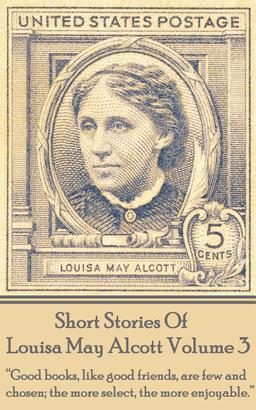 "Good books, like good friends, are few and chosen; the more select, the more enjoyable."

Louisa May Alcott (29th November 1832 – 6th March 1888) was an American writer of great renown almost entirely due to her book Little Women which continues to captivate each generation since it was first published in 1868. However, her life was unconventional, interesting and provided much material for the gripping and moving short stories featured in this volume. Although born in Pennsylvania, she and her father are more closely associated with Massachusetts where the family moved to and Louisa continued to live until her ill health forced her to move to Boston to be near her doctors. Her father was Amos Bronson Alcott, a transcendentalist, philosopher and educational experimenter who founded, Fruitlands, a utopian community and her mother, Abigail May, was a relative of abolitionist Samuel May. Although poor, her liberal and progressive parents provided Louisa with much of her education, which was enhanced by many family friends that included Henry David Thoreau, Nathaniel Hawthorne and Ralph Waldo Emerson, a neighbour whose library she was often found reading in. She started writing stories as a way of providing the family with some financial stability. During the Civil War she went to Washington to be a nurse and became ill with typhoid fever although continued to write and become successful. However, the treatment for typhus gave her mercury poisoning which was to make her ill for the rest of her life and eventually killed her. Although she didn’t marry, her sister’s premature death meant she became her niece’s guardian and she also adopted her nephew who she had to hire help to look after as she nursed her mother to her death and struggled with her own failing health. She visited her father on his deathbed and died herself two days later so they had a joint funeral. As well as her writings, she was a strong supporter of all women’s issues, the anti-slavery movement, temperance and social reform. Her work often reflects on the rich experiences in her life and many of these poignant short stories are a fine testament to this. This Volume includes The Death of John, Rosy's Journey, The Piggy Girl, Cockyloo, A Hole In The Wall, How They Ran Away and The King of Clubs and the Queen of Hearts.

Louisa May Alcott was born in 1832 in Germantown, Pennsylvania, but grew up in Concord, Massachusetts. Educated by her father, the Transcendentalist thinker Bronson Alcott, she was influenced by the prominent men of his circle. Emerson, Hawthorne, Parker and Thoreau. The family was usually short of money, and she worked at various tasks from sewing to writing to help to support it. The Civil War broke out in 1861, and in 1862 she began to work as a volunteer army nurse in a Union Hospital. Out of this came her first book, Hospital Sketches (1863); she went on to write several Gothic romances and thrillers. With the publication of Little Women, her first full-length novel for girls, Alcott leapt from being an obscure, struggling New England writer to becoming the best-selling American author of the century. However, she suffered from ill health aggravated by early deprivation and overwork. Alcott died in Boston in 1888.

The Face In The Target And Other Stories
Gilbert Keith Chesterton

The Head Of Caesar And Other Stories
Gilbert Keith Chesterton

The Temple Of Silence & Other Stories
Gilbert Keith Chesterton