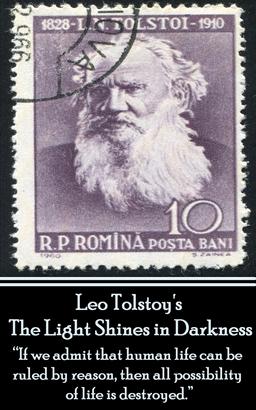 “If we admit that human life can be ruled by reason, then all possibility of life is destroyed.”

Count Lev Nikolayevich Tolstoy was born on September 9th 1828 into Russian nobility but abandoned his title and through his interpretation of the ethical teachings of Jesus became a fervent Christian anarchist and pacifist. His writings on non-violence were to have a profound impact on Gandhi and Martin Luther King. His reputation for many people is based on the epic, in length and scope, of his novel ‘War & Peace’. For that alone Tolstoy would be widely considered to be one of the greatest novelists of all time. But such was the breadth of his talents that he was consummate at short stories, essays and plays. Here we publish ‘The Light Shines In Darkness’ one of those classic plays.

Leo Tolstoy - The Kingdom Of God Is Within You
Leo Tolstoi

Leo Tolstoy - The Cause of it All
Leo Tolstoi

The Wind Among The Reeds & Other Poems
William Butler Yeats