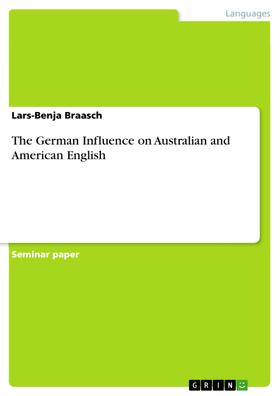 The German Influence on Australian and American English

Buchbeschreibung zu „The German Influence on Australian and American English“

Seminar paper from the year 2008 in the subject Speech Science / Linguistics, grade: 2,0, University of Constance, 8 entries in the bibliography, language: English, abstract: [...]

The aim of this work will be, on the one hand, to describe the history of German
settlement on both continents, and more importantly of the influence of German on
American English as well as on Australian English. On the other hand, a direct
comparison between the German influences will be made, and hopefully it will prove
that even though half the globe separates both continents from each other, there are
similarities to be found. It is to be expected though, that if there are analogies, they
will be regionally restricted, since both in the United States and in Australia, contact
situations seem to be restricted to those areas where Germans settled from the
earliest days on.
Beside the clarification of some general definitions, which will prove necessary for an
understandable analysis, the difficulties in researching this topic will be made evident.

One thing that will not be considered in this examination is the influence of Yiddish-
German on American English since, one the one hand, it proves hard to differentiate
exactly between the German and the Yiddish aspects and on the other hand because
the Jewish impact on Australian English is marginal. Therefore Yiddish-German is
rather unimportant in the comparison of both varieties.

The Phonology of Welsh English: Influence from Welsh
Micha Luther

German Loanwords in English. An Assessment of Germanisms Such As "Sauerkraut, Pretzel and Strudel"
Julia Graßmann

The genre "Netspeak". A contribution of the Internet for English as a World Language
Maximilian Mattes