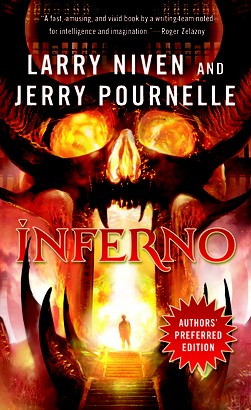 After being thrown out the window of his luxury apartment, science fiction writer Allen Carpentier wakes to find himself at the gates of hell. Feeling he's landed in a great opportunity for a book, he attempts to follow Dante's road map. Determined to meet Satan himself, Carpentier treks through the Nine Layers of Hell led by Benito Mussolini, and encounters countless mental and physical tortures. As he struggles to escape, he's taken through new, puzzling, and outlandish versions of sin—recast for the present day.

Larry Niven is the award-winning author of the Ringworld series, along with many other science fiction masterpieces and fantasy including the Magic Goes Away series. His Beowulf's Children, co-authored with Jerry Pournelle and Steven Barnes, was a New York Times bestseller. He has received the Nebula Award, five Hugos, four Locus Awards, two Ditmars, the Prometheus, and the Robert A. Heinlein Award, among other honors. He lives in Chatsworth, California.

A Memory of Wind
Rachel Swirsky

The Trade of Queens
Charles Stross