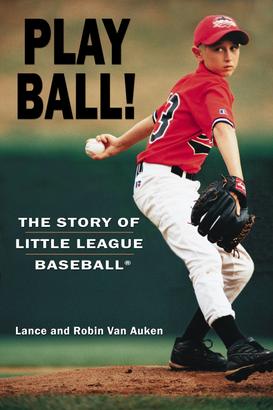 The Story of Little League Baseball®

"'Play Ball!' is a delightful walk down the storied history of Little League Baseball. For those of us who played the dreams of your youth, it brings back mighty memories. For those of us reluctant adults who still dream, it's a wonderful reminder of what might have been." ~ John Grisham, bestselling author

"It's funny: after 40 years, I can't remember much else about a lot of the boys I grew up with, but if you give me one of their names, I can usually remember what Little League team he played on." ~ Dave Barry, Pulitzer Prize winning columnist.

Play Ball! is the remarkable story of Little League Baseball, from the first diamond in Williamsport, Pennsylvania, to the playing fields of Venezuela, Japan, and Poland.

On any given spring evening, 360,000 children around the world can be found on the dusty mounds and grassy fields of a Little League field. With more than four million people playing or volunteering in Little League games every year, Little League is the institutional rite of passage into the quintessential American pastime.

Little League Baseball began in Williamsport, Pennsylvania, in 1938, when Carl Stotz, an oil company clerk, agreed to a game of catch with his young nephews-who were too young to play organized baseball. He recalled how it felt to be left out, and promised to think of a way for the boys to have a league of their own. With the help of neighbors George and Bert Bebble, Stotz created a three-team league. After being turned down by fifty-six businesses, Carl finally convinced a lumber company, a dairy, and a pretzel maker to sponsor the teams, for $30 each. On June 6, 1939, the first Little League Baseball game was played at Park Point in Williamsport.

Play Ball! charts Little League's history from the earliest days and shows how, in many respects, its history parallels America's history: isolation in the beginning; rapid expansion; a civil war of sorts, followed by reconstruction; struggles over civil rights and gender equity; and foreign entanglements. A microcosm of American society, Little League reflects, and is affected by, cultural, political and historical trends.

Today, Little League is played on 12,000 fields in every U.S. state and in 103 other countries on six continents. Little League also sanctions play in softball, Tee Ball, and baseball for disabled children-called the Challenger Division. The Little League Baseball World Series, played annually in Williamsport, is watched by crowds of 40,000 each year in person, and by more than ten million on ABC's Wide World of Sports.

Play Ball! will interest parents, former players and coaches, fans of Little League Baseball, general baseball enthusiasts, and anyone who has ever picked up a ball and bat.

For the Love of Rugby
Steven Gauge

Off The Bench
Gordon Bartlett