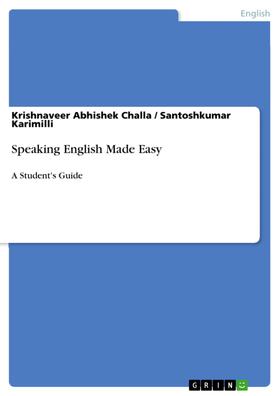 Document from the year 2015 in the subject English Language and Literature Studies - Linguistics, , language: English, abstract: In an era where communication has become synonymous to speaking English, it has become mandatory not only to learn the language but put it into terms to sustain in the competing world. Considering the technicality of the language, it is surely difficult to convey the words spoken, because it is not just about speaking English but it is to make it understandable and lucid. Just as written English is constrained by barricades of Grammar, so does spoken English is restrained by both Grammar as well as phonetics of speech. Dealing with such great tides of difficulty inherent in speaking English, there is a need to simplify the vocalization of this global language.
This book is written especially for University Students, but all stages of learners may also find it useful. The explanations are made as simple as possible. Special care had been taken to cover all the items which are very useful for all non English medium academic background students. Explanations are mostly in ordinary everyday English. This book describes standard modern British English, and gives realistic examples of spoken and written language (both formal and informal).
The book, ‘Speaking English Made Easy’ is an attempt to put forth an easy and effortless way for learning the language. The work presents a unique understanding to bring the language to one’s finger tips. Assembling the various descendants of Grammar, the book interleaves into the technicality of speaking English. The book is also a useful guide for students taking on competitive exams on English. This work can definitely stand on as the sound whose echo vibrates around the world.

Mr. Krishnaveer Abhishek Challa is currently the CEO of Tao Educare. He is a student of English Department, Adikavi Nannaya University, Rajahmundry, Andhra Pradesh and is also pursuing Masters in Journalism and Mass Communications through Distance Education. He scored CGPA of ‘9’ points (Distinction) in P.G. Diploma in English Language and Linguistics. He did P.G. Diplomas in Functional English and English Language Teaching. He is a Diploma holder in Yoga, Environmental Studies, Functional Arabic, and French. He conducted workshops on ‘Personality Development’, ‘Honing Soft Skills’, ‘Soft Skills for Marginalised Youth’, at Andhra University, Visakhapatnam. He was a Resource Person for a workshop at SOS Children’s Village and was the Director of Bay School of Journalism. He taught Journalism at Gayatri Vidya Parishad Degree College and worked as Trainer at TIME institute. His research articles and book reviews were published in various reputed National and International Journals. His article was published in Kurukshetra. He completed Certificate course on Gandhi and Social Exclusion and Inclusive Policy. He visited Blekinge Tekniska Hogskola (BTH), a well renowned University in Sweden as a student for a period of one year and completed various courses on Sustainable Engineering, Mobile Communications, Electromagnetic Field Theory, Mathematics etc. He bagged first prize in the Debate Competition on Green Manufacturing technology at the National Level. He also delivered lecture on ‘Indian Culture’ to the students of Brigham Young University (USA). He published 4 books till date.

English as a language in Arab-speaking Countires
Bharat Koirala