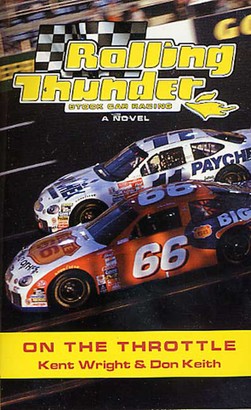 The pedal meets the metal in Rolling Thunder Stock Car Racing--the thrilling series that traces the history of stock car racing from the dusty dirt tracks of East Tennessee to the multi-million-dollar, high-tech venues of today.

On the Throttle by Kent Wright and Don Keith

Hot young rookie "Rocket" Rob Wilder has burst onto the racing scene in a big way, but that first Cup victory has still so far eluded him. But finally Victory Lane is in sight. Wilder's leading the pack at Indy in one of the season's biggest motorsports races when, in an awful instant, his auto racing luck and his magical first year in big-time competition takes a sudden, disastrous turn. For the first time in his fledgling career, the amazingly talented driver must confront his own self-doubts . . . and serious injury.

Does he have the stomach--and the steel--to fight his way back to the head of the pack? If he does, he will have to prove it on the high banks of Talladega, the world's most intimidating racetrack. The engines are hot. The flag is about to drop. Time for talk is over. If Rob is going to win, he'll have to stay on the throttle.

The View from the Clouds
John Hunt