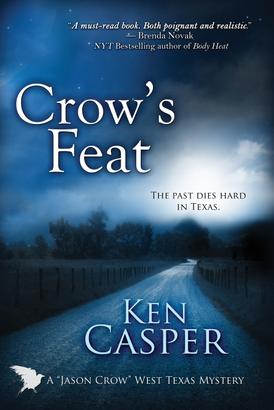 Jason remembers Colonel Bartholomew as a loudmouthed bigot and a drunk. Now the Colonel's been found dead with a knife in his back, and the Texas police think someone in Jason's family killed him.
Jason Crow, double amputee and Vietnam War vet, has good reason to dislike the retired officer who bad-mouthed Jason's father and his African American business partner. But when Bartholomew calls late one night with a mysterious request that Jason come by his house, then turns up dead, Jason has to set his feelings aside.
Clyde Burker, his old police nemesis and now head of the homicide division, doesn't want Jason meddling in yet another murder investigation, but Jason won't stay on the sidelines when Burker points a finger at Jason's own loved ones. As pieces of the truth begin to fall into place, Jason may well hold the key to unlocking the dangerous puzzle.
CROW'S FEAT is the second book in Ken Casper's Jason Crow West Texas Mystery Series, giving readers another glimpse into the world of one of mystery fiction's most intriguing and unique crime solvers.

Ken Casper is the author of more than twenty-five novels, short stories and articles. Born and raised in New York City, Ken is now a transplanted Texan. He and his wife, Mary, board and breed horses at their farm in San Angelo--which includes their own eight horses, two dogs and six cats. Mary is a therapeutic riding instructor for the handicapped. Visit Ken at www.KenCasper.com.

One Flew Over the Crow's Nest
Ken Casper

As the Crow Dies
Ken Casper

The Lies We Tell
Meg Carter

It Was You
Adam Baron