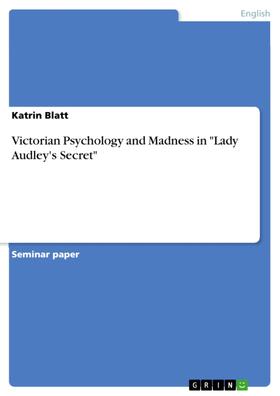 Seminar paper from the year 2008 in the subject English Language and Literature Studies - Literature, grade: 2,5, University of Marburg (Fachbereich Fremdsprachliche Philologien), course: The Victorians, language: English, abstract: The Victorian period was an era with many inventions, renewals, development and changes. The influences of the Industrial Revolution could be seen and felt all over society and economy. Due to this, new economical theories were developed, the population steadily increased and the educational level improved.

Besides, the Victorian era was a very productive time for literature. Victorian novelists were massively influenced by the changes in society and the development of their country. In this time, new genres of literature were invented, such as the bildungsroman, detective and sensational novel. Due to the growing literacy and the introduction of mass media, literature was available for many more people and also different classes. Central topics in the novels often were crime and mystery, but also psychology and madness got more and more popular.

This paper will deal with psychology and madness in Victorian literature. In order to proof the theoretical background an analysis of the sensation novel Lady Audley’s Secret (1862) by Mary Elizabeth Braddon will be done. Madness plays a very important role in this novel and two contemporary theories of the 19th century are discussed.

The first part of the paper is about Victorian psychology in general. However, two selected theories of Victorian psychology will be looked at in detail in order to analyze Lady Audley’s Secret. The next chapter starts with a general overview about madness in Victorian literature. The next part deals with Lady Audley’s Secret, where a general overview about madness in the novel is given and than an analysis of the madness of Lady Audley follows. In the end, a conclusion will be given.

However, it is important to notice that this paper only offers an overview and an introduction to the topic.

Women in the Victorian Era. Oscar Wilde’s comedies "Lady Windermere’s Fan", "A Woman of no Importance" and "An ideal Husband"
Marie-Christin Grigoleit

Shakespeare's "Dark Lady"-sonnets: The hell of sexuality – the sexuality of hell
Eva Sammel