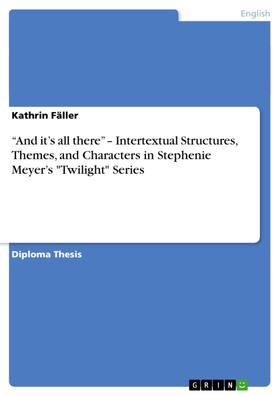 “And it’s all there” – Intertextual Structures, Themes, and Characters in Stephenie Meyer’s "Twilight" Series

Beschreibung zu „“And it’s all there” – Intertextual Structures, Themes, and Characters in Stephenie Meyer’s "Twilight" Series“

Diploma Thesis from the year 2010 in the subject English Language and Literature Studies - Literature, grade: 1,3, Martin Luther University (Institut für Anglistik und Amerikanistik), language: English, abstract: With the growth in popularity due to series like Anne Rice’s The Vampire Chronicles and the motif’s recurring presence in cinematic adaptations of Stoker’s Dracula as well as various TV formats public interest has never ceased to the present day. As the most significant characteristic of the vampire is its being multi-faceted and changing, its potential to be also of great intertextual value can be thereupon considered. Consequently, it can be assumed that Meyer’s tetralogy clearly evokes these instances of intertextuality through the adoption of patterns and themes that have already proved productive in earlier literary works. However, in Meyer’s work these sources are remarkably extended and sometimes even altered as she relies to a large part on her pretexts to tell her narrative and construct a postmodern vampire figure.
In order to achieve a comprehensive analysis it is necessary to incorporate all four volumes – Twilight, New Moon, Eclipse, and Breaking Dawn – of the Twilight series in the discussion. Meyer’s just recently published work The Short Second Life of Bree Tanner: An Eclipse Novella will only engage a marginal part of the analysis as it largely concentrates on the subplot of Eclipse, hence not being particularly significant for the main events of the story. On the other hand, Meyer’s Midnight Sun, although until the present day a yet unfinished and unpublished manuscript, is of great importance for the subsequent analysis.
Meyer dwells on a number of themes, structures, and characters that have intertextual potential. One can distinguish between pretexts that are apparently marked in Meyer’s work and sources that only bear non-literal intertextual references. Pretexts that are overtly marked and are thus explicitly intertextual in the Twilight series are: Emily Brontë’s Wuthering Heights, William Shakespeare’s Romeo and Juliet, The Midsummer Night’s Dream and The Merchant of Venice, Bram Stoker’s Dracula as well as Jane Austen’s Pride and Prejudice,
Sense and Sensibility and Mansfield Park. A number of other pretexts are only covertly marked as they point back to literary traditions or character types. Pretexts that are implicitly marked are: Mary Shelley’s Frankenstein, Johann Wolfgang von Goethe’s Die Braut von Korinth, Samuel Taylor Coleridge’s The Rime of the Ancient Mariner and Christabel, John Keats’ Lamia, Henry Mackenzie’s The Man of Feeling, Lord Byron’s Manfred as well as Roman Polanski’s movie adaptation of Rosemary’s Baby.