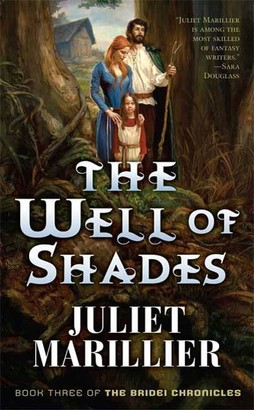 The Well of Shades

Book Three of The Bridei Chronicles

Buchbeschreibung zu „The Well of Shades“

Juliet Marillier continues the epic fantasy begun with The Dark Mirror, which Interzone called "A fascinating evocation of life in Pictish England and an emotional roller coaster of a story," with The Well of Shades: Book Three of The Bridei Chronicles.

King Bridei is a man with a mission. His wish to unite his kingdom seems almost within his grasp but there are forces working to undo his dream. He sends Faolan, his most trusted advisor (who is also a master assassin and spymaster) out into the world to ferret out the truth of who is friend and who is foe.

Along the way Faolan will uncover many truths. Some may hold the key to Bridei's future. But more important, they may unlock the secrets that Faolan has held deep within his soul for decades.

And offer him the chance of redemption.

JULIET MARILLIER achieved international recognition with the publication of the first two award-winning novels in the Sevenwaters Trilogy, a historical fantasy set in Ireland and Britain in the ninth century, and loosely based on the fairy tale “The Six Swans”. Her other historical fantasy series include the Viking-inspired Light Isles duology and the Bridei Chronicles set in north Britain in the time of the Picts.

Forged in Fire
J. A. Pitts

Not Flesh Nor Feathers
Cherie Priest