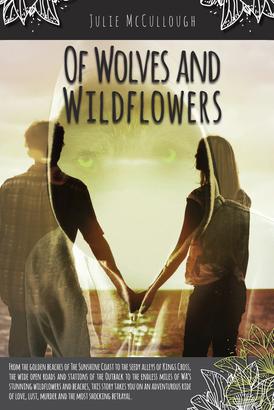 Of Wolves and Wildflowers

Beschreibung zu „Of Wolves and Wildflowers“

From the golden beaches of The Sunshine Coast to the seedy alleys of Kings Cross, the wide open roads and stations of the Outback to the endless miles of WA’s stunning wildflowers and beaches, this story takes you on an adventurous ride of love, lust, murder and the most shocking betrayal.

Sparks fly and, later, he invites her back to Perth with him. She hesitates, but after a terrifying ordeal, at the hands of her Ex, she eagerly accepts.

Pete is found badly beaten up in a Sydney alley. After recovering, he decides to return home to Perth. He secures a lift with a loud and colourful lady, Mo. Their road trip is filled with some very adventurous, memorable, funny and “bestforgotten-and-not-mentioned-again” moments.

In Perth, old friends reunite but old grudges and resentments also reignite, simmering until they reach boiling point. Jo is perturbed by Luke’s brother, Davids attention to her.

Blissful lives are soon shattered by assumptions and betrayal. But as the truth comes out, the tables are turned. Secrets, lies and brutal deception are exposed. In a frantic race against time, whose lives will be lost and whose will be saved?

The Book of Were-Wolves
Sabine Baring-Gould

How Not to Get Divorced
Fiona Perrin