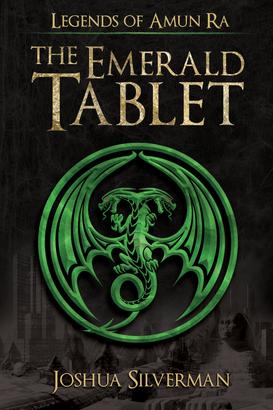 Leoros doesn't have many friends. As the son of a scientist and archeologist, he is constantly on the move. When his parents discover the mythic Emerald Tablet in an ancient city buried beneath Egypt’s desert sands, his world is suddenly turned upside down. He decodes the ancient text which leads him to a distant world.

On that world, a slave girl begins a journey towards a destiny she cannot imagine. But when an ancient foe rises from the ashes, they will be brought together by forces that neither understands.

Leoros, who dreams of being like the heroes in the comic books, must fight to unlock the secrets of the universe to save a people he never knew existed.

Atlantia, whose bloody visions wake her in the night, senses the darkness coming.

Together, they will face an enemy with the power of dark energy, lose a mentor to the assassin’s blade, and be betrayed by someone they trust. Their fight for the future is just beginning, and before it is over, a final sacrifice must be made. When the darkness comes, will they stand and fight or will they join it?

There is darkness in everyone.

Do you wish you could have the power of a god? Would you use it for good…or for evil?

Silverman combines spiritual alchemy, Greek mythology, Egyptian gods and culture to produce a science fiction fantasy series that, once you start reading, you just can't put down. His knowledge of Egyptian culture and history is meticulously portrayed throughout Legends of Amun Ra - The Emerald Tablet. This is a must read for any sci-fi fantasy reader. You will instantly become a Silverman fan.

The Gates of Troy
Glyn Iliffe

Myths of Greece and Rome
H. A. Guerber

The Oracles of Troy
Glyn Iliffe

Wrath of the Gods
Glyn Iliffe