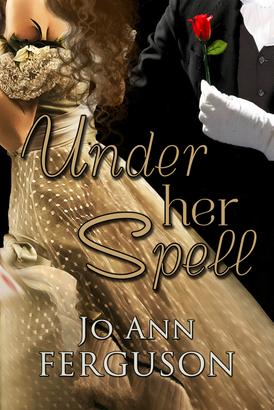 Buchbeschreibung zu „Under Her Spell“

"This novel pulls you into a magical realm offering intrigue and romance."--RT Book Reviews

"Ms. Ferguson is known as one of the top guns of historical romance."--Paranormal Romance Reviews on Daughter of the Fox

Madeleine Nightingale is her magician brother's assistant. They travel town-to-town performing as The Magic Nightingales, but her brother dreams of being on the stage in a fine London theater. Madeleine wants him to be happy, so when she hears a famous theater owner will attend a Faire to be held at Sheffield Priory, she knows it's their chance. She will make sure their show goes perfectly . . . even if she has to use a bit of the true magic that has been her secret gift since childhood.

Christopher Sheffield has arranged a Faire to celebrate Queen Victoria's Diamond Jubilee. But he has an ulterior motive. He wants his mother to receive his mistress Allegra so he can connect his life in London with his life in the country. Everything is going according to plan until he chances upon Madeleine Nightingale and her brother. Thoughts of Allegra fade when he draws Madeleine into his arms.

But Madeleine isn't the easy conquest he'd hoped she'd be. Is it love? Or is it magic? And what is it going to take for him to convince her that he's thoroughly fallen under her spell?

Award-winning author Jo Ann Ferguson lives in Nevada with her husband, children, and a fat cat. She is not sure which is most spoiled.

Ähnliche Bücher wie „Under Her Spell“