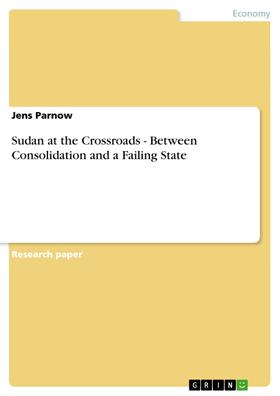 Sudan at the Crossroads - Between Consolidation and a Failing State

Research Paper (undergraduate) from the year 2008 in the subject Economics - Case Scenarios, grade: 1,0, Helmut Schmidt University - University of the Federal Armed Forces Hamburg (Fakultät für Wirtschafts- und Sozialwissenschaften), course: Staatszerfall und Konfliktökonomien in Afrika, language: English, abstract: The recent Darfur crisis and the humanitarian catastrophe have put some public view on the Sudan. Voices to intervene have been raised and quick connections to the massacres in Rwanda in 1994 are made. The fact that the Sudanese people have been suffering from almost 40 years of intermitted civil war seems to play at best an inferior role. Despite the neglect by a vast majority of the public the southern regions are just recovering from devastating civil war and peace is still fragile. The transition to a democratic system is far from being realized, droughts have increased nutrition problems in the South and the revenues from economic growth are distributed very unevenly. In addition to these problems, neighbouring states are either dictatorships with rivalling interests, in a period of uncertain transition or former stable states such as Chad and Kenya which are tumbling towards domestically crisis.

Nevertheless to understand the aims of the opposing actors and how these conflicts were able to develop it is necessary to have a close look on Sudan’s recent past. The essay covers Sudan’s way from a British colony to its independence, followed and accompanied by two severe civil wars and their reasons up to the Darfur crisis today. In the second part the author analyses the aims of the different, local, national and international actors and assesses reasonable strategies for a lasting peace in Sudan. The leading thoughts in this essay are expressed by the main questions: How did the Sudanese civil wars, which culminated in the recent Darfur crisis, evolve? What would be a reasonable
strategy to secure a stable peace in Sudan? The author wants to emphasize the necessity to bring Sudan to a stable peace. As the
biggest country in Africa this could contribute to stability in the whole eastern African region, preventing humanitarian crisis and agony. Hasty decision derived from compassion and quick accusations without the necessary background may lead to false directions. This analysis shall provide objective evidence about the current situation and is intended to contribute to a wider comprehension among students of international politics.