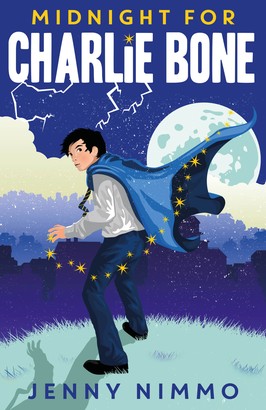 An Academy for magic and special talents. A destiny unfulfilled. A secret legacy.

Since his father died, Charlie Bone has lived with his mother and her mother, in the house of his other grandmother, Grandma Bone. Looking at a picture of a couple with a baby and a cat, he suddenly discovers he can hear their voices. Although he tries to hide his new gift, Grandma Bone and her scary sisters soon find out, and send him to Bloor's Academy. Charlie quickly finds life at Bloor's pretty tough, with its strict rules and the malevolent head boy, Manfred, set against him. When Charlie discovers that the child in the photograph is being held, hypnotised, against her will, he and his new friends with 'gifts' try to awaken her. But can they overcome Manfred's sinister hypnotic gifts?

Have you collected all of the Charlie Bone books?

Charlie Bone and the Time Twister

Charlie Bone and the Blue Boa

Charlie Bone and the Castle of Mirrors

Charlie Bone and the Hidden King

Charlie Bone and the Wilderness Wolf

Charlie Bone and the Shadow of Badlock

Charlie Bone and the Red Knight

Also look out for The Snow Spider trilogy.

‘A fast moving, dialogue driven romp with plenty of cliff-hangers for those first hooked into reading by Harry Potter’ – Bookseller on Midnight for Charlie Bone

Jenny Nimmo is the acclaimed author of the Charlie Bone books for children. She has won several significant awards for her children’s books, including the Nestle Smarties Book Prize and the Tir na n-Og Welsh Arts Council award for The Snow Spider. She lives in Wales with her husband, David.

Jenny Nimmo was born in Berkshire, but has lived in a converted watermill in Wales for the past thirty four years. Her husband is a painter and printmaker and they have three children and three grandchildren. She has worked in the theatre, in television and as a governess in Italy.

For as long as she can remember, Jenny has loved books. She was six when she went to boarding school and reading was a wonderful escape, it allowed her to believe that she was somewhere else. She begn to write her own stories when she was ten. She cannot help using magic in her work because myths legends and fairy-tales were her favourite reading as a child, and they have remained at the back of her mind ever since.

In 1986 her book ‘The Snow Spider’ won the Smarties Grand Prix and, in 1987, was awarded the Tir na n’Og by the Welsh Arts Council. ‘The Rinaldi Ring’ was chosen as Guardian Book of the Week, and was shortlisted for the Carnegie medal, for which she received a commendation.Five of Jenny’s eight books about Charlie Bone in ‘The Children of the Red King’ series were on the New York Times bestseller list, and she has now completed ‘The Secret Kingdom Trilogy’ a prequel to the Charlie Bone Books..

Charlie Bone and the Castle of Mirrors
Jenny Nimmo

Charlie Bone and the Shadow of Badlock
Jenny Nimmo

Double Diamond Dude Ranch #5 - Me, My Mare, and the Movie
Louise Ladd

The League of Seven
Alan Gratz

Down the Mysterly River
Bill Willingham

The Girl Who Ruled Fairyland--For a Little While
Catherynne M. Valente