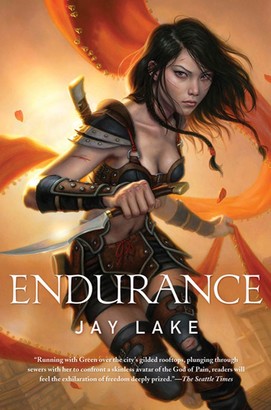 Green is back in Copper Downs. Purchased from her father in sunny Selistan when she was four years old, she was harshly raised to be a courtesan, companion, and bedmate of the Immortal Duke of Copper Downs. But Green rebelled. Green killed the Duke, and many others, and won her freedom. Yet she is still claimed by the gods and goddesses of her world, and they still require her service. Their demands are greater than any duke's could have been.

Godslayers have come to the Stone Coast, magicians whose cult is dedicated to destroying the many gods of Green's world. In the turmoil following the Immortal Duke's murder, Green made a God out of her power and her memories. Now the gods turn to her to protect them from the Slayers.

Jay Lake brings us an epic fantasy not "in the tradition of Tolkien," but, instead, sensual, ominous, shot through with the sweat of fear and the intoxication of power.

Seaspray: The Quest for the Trilogy
Mel Odom

Lord of the Libraries
Mel Odom