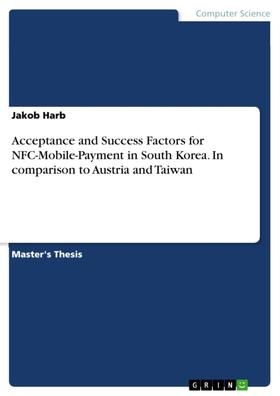 Acceptance and Success Factors for NFC-Mobile-Payment in South Korea. In comparison to Austria and Taiwan

Beschreibung zu „Acceptance and Success Factors for NFC-Mobile-Payment in South Korea. In comparison to Austria and Taiwan“

Master's Thesis from the year 2016 in the subject Information Management, grade: 1, University of Graz (Department of Information Science and Information Systems, University of Graz, Austria / Department of Management Information Systems, Chungbuk National University, Republic of Korea), language: English, abstract: NFC-Mobile-Payment describes contactless payment transactions using near-field-communication-technology. This payment technology is currently used in bank- and credit cards, as well as in mobile phones. This thesis focuses on NFC-Mobile-Payment using mobile phones. Aim of this work was, to identify the drivers of the customer adoption of NFC-Mobile-Payment in South Korea and compare them to previous findings from Austria and Taiwan. The drivers have been analyzed using the model of Pham and Ho that bases on the Technology-Acceptance Model (TAM). The countries have been compared to each other taking in account cultural, technological, and sociological differences and similarities. An empirical inquiry has been processed and data has been collected through an online survey. The found data was analyzed using the Maximum-Likelyhood-Method. In South Korea, the users’ trust in the involved companies and people, the absorptive capacity, the compatibility with the lifestyle and the tasks of the users the trialability, the personal innovativeness the attractiveness of available alternatives and the perceived usefulness were identified as influential drivers on the adoption of NFC-Mobile-Payment. The findings from South Korea differed significantly from those in the other two countries. Significant differences between Korea and the other two countries were found in all observed drivers except the users’ trust in the involved companies and people and the attractiveness of available alternatives. Another important finding is that in some aspects, the two Asian countries share more similarities with each other than both do with Austria, but in other aspects, Austria and Korea were found to be much closer to each other than each of them to Taiwan. Suggestions to executives of involved companies and institutions are provided in order to support enhancing the customer adoption of NFC-Mobile-Payment and other technological solutions with similar characteristics.

Ähnliche Titel wie „Acceptance and Success Factors for NFC-Mobile-Payment in South Korea. In comparison to Austria and Taiwan“

How do Fintech Startups and a Changing Consumer Behavior Reshape the Financial Services Industry?
Viktor Kanzler

Summary of The Third Wave
. Instaread