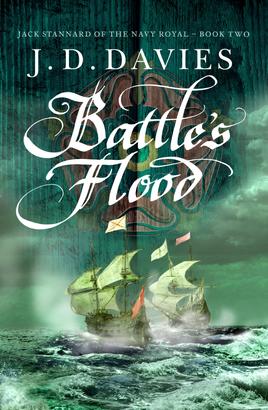 Captain Jack Stannard showed his worth in the Battle of the Solent. But little did he know how his actions there would change his life forever.

After a lucky escape at sea, he is drawn to Elizabeth I’s spymaster Francis Walsingham, who sets Jack on an extraordinary mission to Africa and the Caribbean in company with two unscrupulous sea captains, John Hawkins and Francis Drake.

Stannard may be a man of the sea at heart, but for the former Dunwich lad, this is adventure on a new and unprecedented scale, from the force of a hurricane to the might of the Spanish fleet.

The next instalment in the enthralling Jack Stannard and the Navy Royal series, Battle’s Flood is perfect for readers of Julian Stockwin and the Hornblower novels.