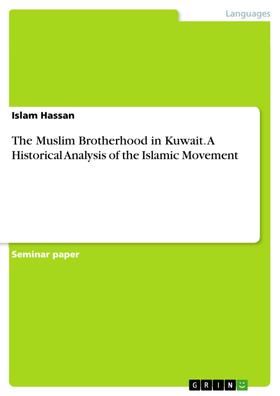 The Muslim Brotherhood in Kuwait. A Historical Analysis of the Islamic Movement

Buchbeschreibung zu „The Muslim Brotherhood in Kuwait. A Historical Analysis of the Islamic Movement“

Seminar paper from the year 2014 in the subject Orientalism / Sinology - Islamic Studies, grade: 1.00, , course: Islam & Politics in the Gulf, language: English, abstract: The Muslim Brotherhood has been a source of fear to many Arab regimes, especially Gulf monarchies. Growing from a small society in a small town in rural Egypt to a transnational organization threatening regimes across the region is a phenomenon that deserves study. This paper examines the evolution of the MB since its escape from the ‘republic of fear’ in Egypt to threatening the political apparatus of Kuwait. The paper also highlights the re-adaption of the Kuwaiti MB's ideology throughout its history to fit the Kuwaiti setting.

Firstly, the paper provides a historical narrative of the MB in Egypt until their disbandment by Abdel Nasser which is critical to understand the roots behind the spread of their ideology in the Gulf. Secondly, it lays out the setting in Kuwait at the time the MB's ideology hit the Kuwaiti soil. Thirdly, the paper discusses the establishment of the first MB branch in Kuwait by Abdul Aziz Ali Al Mato'; and the second stage of the MB's experience in Kuwait that started with changing its name to the "Islamic Guidance of Society." Fourthly, the paper highlights the termination of the Guidance organization and establishment of the “Social Reform Association” which marked the participation of the MB in shaping the Kuwaiti politics. Lastly, the paper examines the establishment of the Islamic Constitutional Movement (referred to as ICM henceforth) marking a new era in the MB's function in the Kuwaiti political arena.

Mr. Islam Hassan
A specialist in International Relations and State-Society relations in the Gulf, and a Teacher Assistant at the College of Arts and Sciences at Qatar University. He studied at Georgetown University, and is currently working on his Master&apos;s thesis at Qatar University on the influence of government policies on social stratification in the State of Qatar. As a critic and scholar, his work is centered around Gulf Studies, Comparative Politics, and International Relations of West Asia and North Africa.

Ähnliche Bücher wie „The Muslim Brotherhood in Kuwait. A Historical Analysis of the Islamic Movement“

The mysticism of Islam
E.H. Palmer

Islamic Movements in Uzbekistan: Who is Hizb-ut-Tahrir?
Franco Burgio