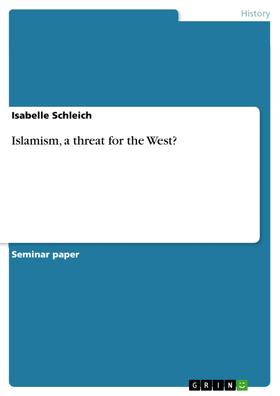 Islamism, a threat for the West?

Buchbeschreibung zu „Islamism, a threat for the West?“

Seminar paper from the year 2011 in the subject History Europe - Other Countries - Newer History, European Unification, grade: 1,5, University of Luxembourg, course: Regionalismin World Politics, language: English, abstract: In this research paper, I intent to analyse Islamism and its effects on the western world. Does Islamism really represent a danger to western civilisation? Is Islamism in decline, as written by the French scholar Gilles KEPEL? What measures does the European Union take to ensure the security of the people and to protect them from terrorist acts?

To describe people’s view on the Orient and the Arabic world, I begin in a first chapter with a monograph written by the U.S. – Palestinian author Edward SAID on Orientalism and the representation of Muslims and Arabs in western media.

In a second chapter, I will continue with Gilles KEPEL’S thesis on the decline of Islamism and oppose it in the third part to Bassam TIBI’S counter thesis. I will base my analysis mainly on KEPEL’S book about the jihad , where he develops his thesis on the ascension and decline of Islamism, and on Bassam TIBI’S writings “The Challenge of Fundamentalism: Political Islam and the New World Disorder” and “Der neue Totalitarismus” where he describes Islamist fundamentalism and its impacts on the West.
The fourth part of this paper deals with the anti-terror measures of the European Union and the question on how they affect people’s privacy.

Ähnliche Bücher wie „Islamism, a threat for the West?“

The Rebirth of Europe
Joe Majerus