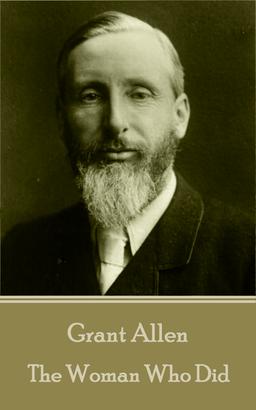 The Woman Who Did

Beschreibung zu „The Woman Who Did“

Charles Grant Blairfindie Allen was born on February 24th, 1848 at Alwington, near Kingston, Canada West (now part of Ontario). Home schooled until 13 when his family moved to England, Grant was to become a highly regarded science writer who branched out to a fiction career and became enormously popular. His work helped propel several genres of fiction and whilst his career was short it was enormously productive. Grant’s scientific background enabled him to root much of his work in a plausibility that was denied to others. He had little fear in challenging a society that treated women as second class citizens and creating best sellers from such works. On October 25th 1899 Grant Allen died at his home in Hindhead, Haslemere, Surrey, England. He died just before finishing Hilda Wade. The novel's final episode, which he dictated to his friend, doctor and neighbour Sir Arthur Conan Doyle from his bed appeared under the appropriate title, The Episode of the Dead Man Who Spoke in 1900.

Ähnliche Titel wie „The Woman Who Did“

The Lay Of The Last Minstrel
Sir Walter Scott